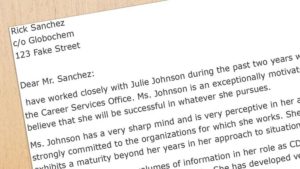 The above question is one that many employees ponder when they have been terminated from their employment. Many believe that an employer is obligated to provide an employee with a reference letter. This belief, however, is incorrect. That is not where the story ends though.

While an employer is not obligated at law to provide a reference letter, when it comes to wrongful dismissal litigation, it is actually to both the employee and employer’s benefit for an employer to write the letter.

Firstly, this is because of the employee’s obligation at law to mitigate. Any income earned by the employee during the notice period is deductible from any potential wrongful dismissal damages owed by the former employer. Therefore, an employer also has an interest in their former employee being able to find new employment.

Secondly, failing to provide a reference letter to a former employee can prove costly to the employer and be considered a factor compelling a wrongful dismissal award at the higher end of the range of reasonable notice.

What Does the Case Law Say?

In Nemirovski v Socast Inc., 2017 ONSC 5616 [“Nemirovski”], the Court did exactly that mentioned above: provide the employee with a wrongful dismissal award at the higher end of the range of reasonable notice.

The employee in Nemirovski was 40 years old, had 19 months of service as a product manager and earned $100,000 in salary. The employee made significant efforts to mitigate, which included participating in over 30 job interviews, but was only able to find alternative employment after 9.5 months. In the new job, he was earning $15,000 less than he had with his former employer.

The availability of alternative employment in his field was poor and notably, he was not provided a reference letter by his former employer. Accordingly, keeping in line with earlier case law from the Ontario Court of Appeal, as outlined below, the judge awarded the employee notice at the high end of the range, which was nine (9) months’ notice plus benefits. This amounted to an award of $78,333.40 for 9 months’ notice plus benefits estimated at 10% of salary for that time period.

In Beth v. Advanced Micro Devices Inc., [2007] O.J. No. 5646, aff’d 2008 ONCA 686, at paragraph 39 of the trial decision, the judge stated the following in the context of an employee having great difficulty in finding alternative employment:

… In that regard it would have behooved AMD to give him more than a letter of dismissal containing what can only be termed an insincere expression of regret about having to let him go because of reorganization. AMD at least owed him a letter of reference that would have met any uncertainty in the market place with respect to his ability and experience which it knew to be equivalent to and in some instances superior to the market expectations of a more academically qualified candidate. Had that been done for him after having served the employer so well and so loyally, in all likelihood it would not have taken him 10 months to secure equivalent employment.

The Nemirovski case illustrates that it is important (1), for employees to make reasonable efforts and document those efforts to find alternative work and (2), for employers to specifically consider the potential liability if they fail to provide an employee with a letter of reference.

While employees have an obligation to mitigate after being terminated from a job, a reference letter, while a small token, can assist in that process. Employees should make a request for a letter of reference at the end of their employment. Of course, the most favourable references come from those that you’ve worked closely with so it is best to try to get a more personalized reference if possible from an individual.

Employers are encouraged to seriously consider writing letters of reference for former employers who have been terminated, especially in cases where the issues on termination are not contentious. In the long run, such a small gesture could go a long way to reducing the employer’s exposure to potentially greater liability.

If you have any questions about your responsibilities or entitlements at the end of an employment relationship, please contact Monkhouse Law for a free consultation.

About the Author: Busayo Faderin is a Senior Associate and Toronto Employment Lawyer at Monkhouse Law where she practices Employment, Human Rights and Disability Insurance Law.