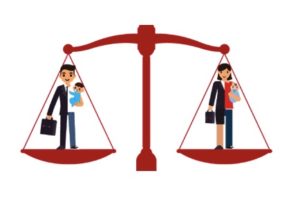 Job security for new parents – are you protected? The Employment Standards Act, 2000 (“ESA”) provides eligible employees who are pregnant and/or new parents the right to take unpaid time off work. This comes with some protection for employees, as he/she is entitled to:

Section 46(1) entitles a pregnant employee to a leave of absence without pay unless her due date falls fewer than 13 after she began her employment. Section 74(a)(viii) of the ESA prohibits an employer from intimidating, dismissing or penalizing, including threatening, an employee because the employee is or will be eligible to take a leave, intends to take a leave or does take a leave. The ESA goes further to protect the employee, by requiring the employer to prove that they did not contravene the above.

In addition, the Ontario Human Rights Code, RSO 1990, c. H. 19, prohibits termination and adverse treatment based on discriminatory treatment such as family status (and arguably, sex). This prevents employees from terminating a woman because of her desire to become pregnant as well as a man/woman because of their intention to take a leave of absence to care for a new child.

Employers can dismiss an employee for legitimate reasons unrelated to the fact that the employee took a leave, such as the closure of a department or office. The onus is on the employer to prove that the termination was unrelated to the subsequent leave. Failure to do so may result in an order to reinstate the employee as well as additional damages for adverse and discriminatory treatment. In each scenario, an employee is still entitled to reasonable notice for the termination of their employment. It is always important to have a severance package reviewed by a lawyer prior to agreeing to any separation.

Employees Terminated as a Result of Discrimination

The Supreme Court of Canada decision of Brooks v. Canada Safeway Ltd., [1989] 1 SCR 1989 CanLII 96 (SCC) supports how discriminating against pregnant women fall within the category of discrimination on the basis of sex.

In Maciel v. Fashion Coiffures Ltd. et al 2009 HRTO 1804 (CanLII), the Applicant was awarded significant damages after a finding of discrimination based on pregnancy, not only for the injury to her dignity, feelings and self-respect ($15,000) but also towards her loss of income and maternity benefits. She was awarded $35,719.00 in total. If it is found that an employee is terminated as a result of their leave of absence, remedies can include additional damages or reinstatement.

In Harris v. Yorkville Sound Ltd., 2005 an employee who was terminated due to her pregnancy was found to be entitled to an elongated notice period due to the difficulties surrounding seeking re-employment as a new parent.

Where Employees are Lawfully Terminated

For the most part, new parents go through the Employment Insurance system to receive a percentage of their income throughout their parental leave. This, as described is the same “umbrella” of benefits that individuals who are unemployed go through. This places new parents, recently terminated in a particularly vulnerable position as it eliminates the opportunity to receive additional coverage since the Employment Insurance benefit has been “exhausted” by the previous pregnancy or parental leave.

Although Ontario makes efforts to help protect new parents, Ontario may benefit from looking to other provinces, in order to offer new parents even more protections, especially financially. For instance, in 2006 Quebec created the Quebec Parental Insurance Plan, which is separate from Employment Insurance, offering more robust benefits, and in the event a new parent is terminated during or after leave, it does not exhaust their ability to collect Employment Insurance. The plan covers up to 75% of income for 55 weeks, in contrast to the 55% offered by Employment Insurance. In addition, the benefits start being paid right away, instead of having to wait for the 2 week period for Employment Insurance.

Employees can expect to see changes Federally, as the new Liberal government has promised and discussed lengthening the current 12-month parental leave to 18 months, and offering additional protections to fathers who want to take leave as an effort to give more opportunities for women in the workforce.