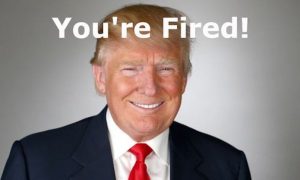 Donald Trump is known for many things – his wacky hair, his casinos, his luxury hotels, and most recently for his foray into presidential politics. Those who watched his reality TV Show, “The Apprentice,” however, will forever remember him for his fateful catchphrase, “You’re Fired!”

When contestants on The Apprentice were fired by Mr. Trump their time on the reality TV show came to a sudden and tragic conclusion.

Thankfully, the average Canadian need not suffer the indignity of being publicly shamed by Mr. Trump on national television upon being terminated from their employment. Dismissed employees, however, face an uncertain future and, in the vast majority of cases, do not know what their rights are.

Despite the foregoing, it is probably safe to assume that most Canadians understand that if they are terminated by their employer without cause –that is, without having done anything wrong – that they are owed some measure of notice of that termination, or compensation in lieu thereof.

Not surprisingly, the common law affords employees who are dismissed without cause with the right to “reasonable notice” of their termination. In other words, your employer either has to provide you with enough advance notice of your termination or must pay you an appropriate amount of money in lieu of notice.

What most Canadians probably do not recognize, however, is that, in some cases, dismissed employees can force their employer to give them their job back or some other position. In legal terms, this remedy is known as ‘reinstatement.’

While reinstatement is uncommon, and in fact for many employees undesired, it is possible in certain circumstances.

This post explores when reinstatement is available as a remedy for non-unionized employees who have been dismissed and why you should speak to an employment lawyer about this issue.

At the outset, it should be noted that unionized employees are entitled to seek reinstatement as a remedy if their collective bargaining rights are violated. In fact, as the Supreme Court of Canada stated in Alberta Union of Provincial Employees v. Lethbridge Community College, 2004 SCC 28 (CanLII), “As a general rule, where a grievor’s collective agreement rights have been violated, reinstatement of the grievor to her previous position will normally be ordered.”

In the non-unionized context, federally regulated employees are afforded the option to seek compensation in the civil courts or put forward an unjust dismissal complaint under the Canada Labour Code RSC, 1985, c. L-2 (“CLC”), where reinstatement is available. As the Supreme Court recently confirmed in Wilson v Atomic Energy of Canada Ltd, 2016 SCC 29 (CanLII) (“Wilson”), the unjust dismissal provisions of the CLC were enacted in 1978 to provide non-unionized dismissed employees with the ability to pursue the more powerful remedies which have traditionally been available to workers in the collective bargaining context.

Thus, adjudicators appointed under the CLC to hear unjust dismissal complaints are expressly afforded the power to “reinstate the person to his employ,” provided the employee was dismissed without cause.

Moreover, the Ontario Human Rights Tribunal also has the power to reinstate an employee provided a breach of the Ontario Human Rights Code, RSO 1990, c H.19 (OHRC) is established. As the Ontario Court of Appeal recently held in Hamilton-Wentworth District School Board v. Fair, 2016 ONCA 421 (CanLII) (“Fair”), “while rarely used in the human rights context, the remedy of reinstatement clearly falls within the Tribunal’s discretion to order under s. 45.2(1) of the Code . . .”

The tough question, however, is when reinstatement is an appropriate remedy under the unjust dismissal provisions of the CLC or under the OHRC. As noted above, In the collective bargaining context, unless there is strong evidence suggesting that a continued employment relationship between the grievor and his or her employer is impractical, reinstatement is “normally” ordered. It is not clear, however, that the same approach is applicable to non-unionized employees seeking reinstatement.

In Wilson, for example, the court reproduced the following observation of Prof. George Adams:

. . . , this does not mean that Adjudicators should import the law of the collective agreement in discipline cases unthinkingly and without modification. They should be extremely sensitive to the varying employment contexts subject to this new provision of the Code, many of which may not fit comfortably within the “industrial” discipline model. In such cases appropriate modifications can be made as required.

Accordingly, there is authority for the proposition that not all of the legal principles developed in the collective bargaining context should also apply to the adjudication of non-unionized unjust dismissal complainants. Moreover, prior to Wilson, courts and adjudicators have wavered over whether reinstatement should be the norm. In a footnote to Atomic Energy of Canada Ltd. v. Sheikholeslami, [1998] 3 FCR 349, 1998 CanLII 9047 (FCA), the Federal Court of Appeal noted that between 1978 and 1984 only 54% of unjustly dismissed employees were ordered reinstated.

In principle, however, it is difficult to understand why non-unionized unjust dismissal complainants should not also benefit from the presumption of reinstatement as do unionized workers. Arbitral jurisprudence in the collective bargaining context has recognized that reinstatement is most often the best way to put a worker back into the position they would have been but for their unjust dismissal. It is difficult to see why the same is not true for non-unionized workers.

As such, there is an argument that reinstatement should be presumptively available as a remedy for non-unionized employees. The crucial question should be whether the circumstances of any particular case are such that reinstatement is impractical or undesirable due to the nature of the relationship between employee and employer, not whether the employee is unionized or not.

The Court of Appeal’s Recent Decision in Fair

Arguably, in Fair, referred to above, the Court of Appeal moved the law closer to a point where reinstatement for non-unionized employees becomes routine.

Ms. Fair worked from 1988 until 2001 in the position of Supervisor, Regulated Substances, Asbestos with the Hamilton-Wentworth School Board at which time she developed an anxiety disorder as a result of her job duties. Sometime in June 2003, Ms. Fair indicated that she wanted to return to work but in a different position that would accommodate her anxiety disorder. The School Board, however, determined that they were unable to accommodate Ms. Fair on the argument that there were no suitable alternate positions available. On December 15, 2003 Ms. Fair filed a human rights complaint, claiming that the School Board had discriminated against her by failing to accommodate her disability. The Human Rights Tribunal found that Ms. Fair had been discriminated against, that there were, in fact, suitable alternate positions available to her at the School Board that she ought to have been offered and that reinstatement was an appropriate remedy. On appeal to the Divisional Court and subsequently to the Court of Appeal the Tribunal’s decision was upheld.

On the issue of the proper remedy, the Court of Appeal agreed that reinstatement was reasonable and properly ordered highlighting the fact that, in the union context, employees are “normally” ordered reinstated. The Court of Appeal also reproduced a section of the Tribunal’s decision which stated that “The goal of human rights legislation, which is remedial in nature, is to put the applicant in the position that he or she would have been in had the discrimination not taken place” and that “Where viable, reinstatement is sometimes the only remedy that can give effect to this principle.”

The decision in Fair seems to signal an increasingly favourable environment for the reinstatement of non-unionized employees – a welcome development.

Why Reinstatement Matters and Things an Employee Should Know

Reinstatement is a powerful remedy. When an employee is ordered reinstated they are also often entitled to back pay. In short, this means that the dismissed employee will be compensated for any lost income they suffered as a result of their dismissal.

The possibility of reinstatement exposes employers to expansive financial liability and the potentially unsavoury prospect of having to re-employ someone they decided to terminate. Thus, reinstatement creates a strong incentive for employers to settle disputes on more favourable terms for employees.

It is important, however, that employees do not miss their chance at seeking reinstatement as a remedy. An employee who believes they have been terminated based on a protected ground in the OHRC has one year after the discriminatory treatment occurred to make an application to the Human Rights Tribunal. Failure to make an application within this time frame may preclude an employee from having their complaint adjudicated.

Under the Canada Labour Code, federally regulated employees have only 90 days from the date of their dismissal to file an unjust dismissal complaint. Therefore, it is important to contact an employment lawyer as soon as you are terminated or given notice thereof to take advantage of the remedies available to you under the CLC or the OHRC.

If you believe you have been unjustly dismissed or have any other employment law related inquiries, contact Monkhouse Law today.