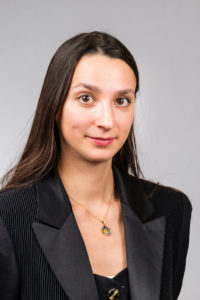 Alexandra is a lawyer practicing employment law, and general litigation with a focus on major claims and class actions. Prior to working at Monkhouse Law, she summered, articled and worked as an associate at Davies Ward Phillips & Vineberg LLP, one of Canada’s most prestigious law firms.

She is trained in conducting mediations and has been appointed by the government of Ontario to be on the roster of Toronto mediators for mandatory mediation. On the advisory side, Alexandra has successfully completed CPA Canada’s In-Depth Taxation Course.

Alexandra clerked for the Court of Appeal of Paris and interned with both Supreme Courts of France. She has also completed a traineeship with the European Commission in Brussels where she worked for Commissioner Michel Barnier.

She has appeared numerous times at the Ontario Superior Court of Justice and also before the Supreme Court of Canada.

Recent Notable cases (note: each case is individual and past success does not guarantee future success):

Singh v. RBC Insurance Agency, Ltd., 2020 ONSC 267 (CanLII): Responding to Motion to Strike: Alexandra was lead counsel resisting a motion to strike and was successful in resisting the claim, subject to amendments being filed as is customary in such cases.

Singh v. RBC Insurance Agency Ltd., 2020 ONSC 182 (CanLII): Class Action Scheduling Motion: Alexandra was successful with co-counsel Andrew Monkhouse in arguing that the Defendants ought not be allowed to bring a summary judgment motion prior to the certification hearing of the class action.

Phillip v. Deloitte, 2019 ONSC 7300 (CanLII): Class Action Document motion: Alexandra moved a motion in this class action for productions and was successful in requiring the Defendants to produce their insurance policy and having them agree to produce other documents to move the class action forward.

Morris v Solar Brokers, 2019 ONSC 6817 (CanLII): Class Action Certification: Alexandra was lead counsel certifying a class action on behalf of workers who were called contractors working for a solar panel sales firm operating out of Ontario and Alberta. Monkhouse law was successful in certifying the claim.

Joshi v. Allstate Insurance Company of Canada, 2019 ONSC 4382 (CanLII): Defamation Proceeding: Alexandra was co-counsel on defending an employee being sued by their past employer for speaking out about human resources practices. The claim was dismissed against the employee and the company was required to pay almost $100,000 in Monkhouse Law’s legal fees.