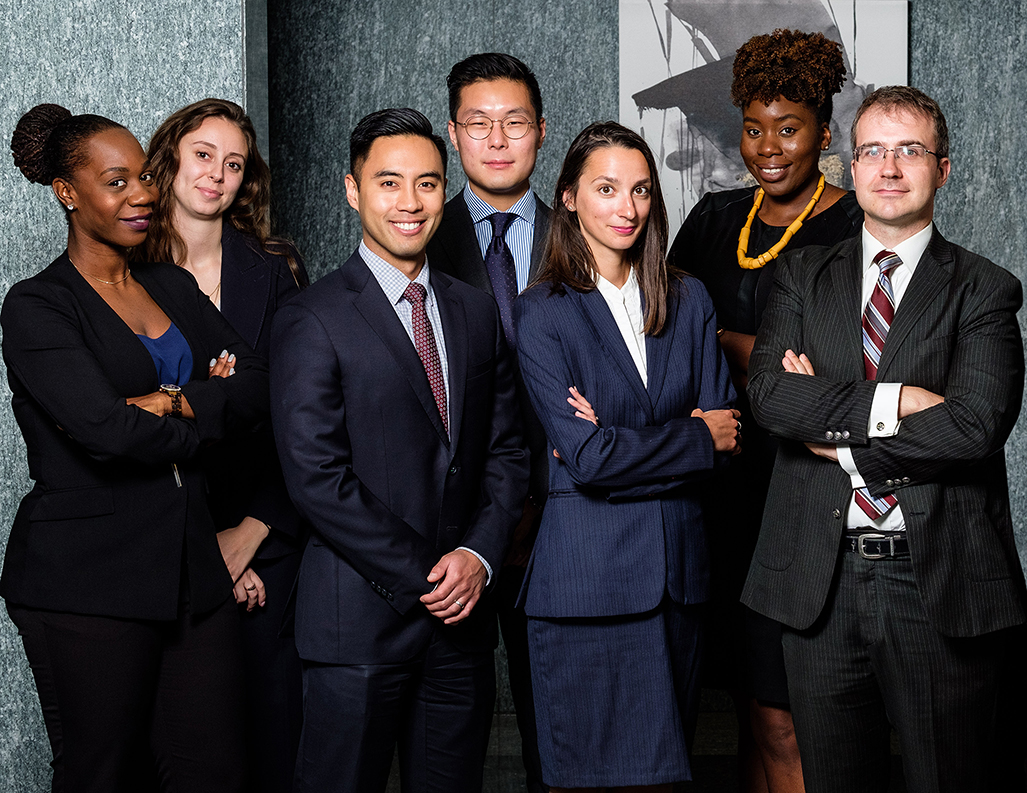 Certification of Class Action – Curtis v. Medcan Health Management Inc., 2022 ONSC 5176: Andrew and Alexandra Monkhouse represented the plaintiffs in a proposed class action for vacation and statutory holiday pay on commissions that was certified by the Ontario Superior Court.

Certification of Employee Misclassification Class Action – Morris v Solar Brokers, 2019 ONSC 6817 (CanLII): Andrew was co-counsel with Alexandra Monkhouse certifying a class action on behalf of workers who were called contractors working for a solar panel sales firm operating out of Ontario and Alberta. Monkhouse law was successful in certifying the claim.

Successful Anti-SLAPP Motion – Joshi v. Allstate (2019 ONSC 4382):Motion: Andrew was co-counsel with Alexandra and represented an employee against her past employer dismissing their counterclaim for $700,000 which was found by Justice Kimmel to be an infringement on her rights of expression. The claim was dismissed against the employee and the company was required to pay almost $100,000 in Monkhouse Law’s legal fees.

Wrongful Dismissal of Executive – Battiston v. Microsoft Canada Inc., 2020 ONSC 4286 (CanLII): Trial Decision: Andrew was co-counsel with Samantha Lucifora in this trial which found that the notice plan Microsoft used to inform their employee about share plan limitations were invalid thus granting the employee the shares (RSU’s) in question. The employee also received 24 months notice and bonuses throughout his notice period. Andrew was later successful in having the court award $120,000 to cover legal fees associated with the claim.

Successful Court of Appeal Decision Wrongful Dismissal of Executive – Ruston v. Keddco: Monkhouse Law represented the terminated employee at the Court of Appeal. The Court denied all appeal attempts and awarded an additional $35,000 to cover the employee’s legal fees.

Successful Trial Decision Wrongful Dismissal for Executive – Ruston v. Keddco:  Andrew represented an 11 year President of the company who was terminated by the owners after accusations of fraud. After an 11 day trial, the $1.7 Million dollar fraud claim was found to be entirely without merit and the President was awarded a long notice period (19 months), his full bonus during the notice period, and $125,000 in damages between punitive and moral damages for the behaviour and tactics of the Defendant.

Half a Million Dollars Awarded in Costs For Wrongfully Dismissed Executive – Ruston v. Keddco: Costs Decision: Monkhouse law was awarded the full amount requested for legal fees in the Ruston case, being $546,684.73, which is the largest amount of costs awarded to a wrongfully terminated employee that has been reported. The trial judge commented on how prepared Monkhouse Law was at the trial in awarding that amount.

Successful Ontario Court of Appeal Decision for Wrongful Dismissal – Paquette v TeraGo Networks Inc.: Ontario Court of Appeal Decision: As the trial judge denied the Plaintiff his bonus Monkhouse Law appealed the case successfully to the Court of Appeal, which ruled that employees are owed bonuses during their notice periods. With Andrew’s assistance, the employee received an additional $58,386.64 in bonus, plus a contribution to legal fees. This decision set an important precedent for employment law in Canada for bonuses during notice periods.

Successful Wrongful Dismissal Case – Johar v Best Buy Canada: Andrew and Samantha won the case without calling a single witness by bringing a summary judgment motion. He assisted an employee terminated for cause in his claim against Best Buy and was fully successful in proving wrongful dismissal.

Chen and Bank of Nova Scotia, Re: Canada Adjudication (Canada Labour Code Part III) Decision (2017 CarswellNat 3170): Andrew and Miguel were succesful in a CLC adjudication in which the Defendant employer was found not to have discharged the onus of establishing that the actual, operative and dominant reason for the termination of the client’s employment was either ‘lack of work’ or the ‘discontinuance of a function’.  As a result, the preliminary objection by the Defendant employer failed and the adjudication was allowed to continue on its merits.

Successful Preliminary Motions – Herzuk v. Kleiman: Andrew and Busayo were counsel on several complex motions before a Master to limit the scope of trial. Because of the preliminary result, the Defendant conceded right after the release of the decision by accepting the Plaintiff’s previous offer.

OLR Arbitration – Journeymen v. Core One: Andrew and Busayo were counsel on a labour arbitration before the Ontario Labour Relations Board representing an employer. This was a preliminary decision allowing the employer to advance their arguments for after acquired cause and also that the initial termination was a justified layoff.

Successful Wrongful Dismissal Case – Menard v. The Centre for International Governance Innovation: Trial Decision: Andrew represented a 6 year Vice President Finance who was terminated and his employer claimed after acquired cause based on breach of policy. The company dropped their counterclaim before trial and at trial, the Executive received 2 months per year of service, for a total of 12 months notice notwithstanding the alleged cause or a claim that the contract limited his notice period to 12 weeks. Costs Decision: (2019 CarswellOnt 8241, 2019 ONSC 2467) Monkhouse Law was awarded costs on a substantial basis in the amount of $175,000 to cover fees relating to prosecuting the case.

Successful Trial Decision – Paquette v TeraGo Networks Inc.: In this case, the Plaintiff was dismissed without cause by the Defendant and brought a summary judgment motion in his wrongful dismissal action. Paquette was employed for 14 years and 4 months and earned an annual salary of $150,000.00. Andrew was able to get his client 17 months’ of pay in lieu of notice, damages of $163,267.90 for his salary as well as for lost benefits.

Successful Appeal in Constructive Dismissal Case – Kurt v Idera Inc.: Divisional Appeal Court: In this case, Andrew successfully argued Divisional Court of Appeal regarding a constructive dismissal matter. On Appeal, the Court found that the motion judged erred in law, and the matter was ordered back for a new summary judgment hearing.

Successful Wrongful Dismissal and Termination Clause Case – Singh v. Qualified Metal Fabricators: Trial Decision (2016 CarswellOnt 8795, 267 A.C.W.S. (3d) 867). At trial, Andrew successfully argued that the contract which attempted to limit the employee to minimum notice was invalid and got his client a month’s pay per year of service. Based on an internal survey of cases at least one-quarter of all employment contracts are invalid based on the logic utilized in Singh.  After a successful trial, the judge awarded significant costs against the Defendant covering the Employee’s legal fees so that he was able to keep his entire severance (2016 CarswellOnt 8796, 267 A.C.W.S. (3d) 787).

Successful With Cause Dismissal Case – Summary Judgement Asgari v 975866 Ontario Ltd.: Monkhouse Law successfully argued that a summary judgment motion was appropriate where the employee was terminated with just cause. The Defendant relied on the company handbook to limit the reasonable notice period. However, Andrew won the argument that the handbook was not a contract of employment.

Successful Enforcement of Settlement – Zhang v. Totally Zing Inc.(2016 CarswellOnt 17956). The Defendant company settled but then denied there was a settlement and refused to pay. Andrew went to Court to enforce the settlement, resulting in the Court enforcing the settlement, plus legal fees for the enforcement.

Successful Cost Award in Wrongful Dismissal Case – Manase v Toronto District School Board: Prior to the commencement of a hearing in a wrongful dismissal matter involving a dispute on if the employee was an independent contractor or not, the Plaintiff accepted a settlement offer, plus costs to be assessed if not agreed by the parties. The costs were not agreed to and in this decision on the matter, Andrew successfully obtained his client costs in the amount of $40,000.00 to cover his client’s costs.

Successfully Defeated Motion to Stay Wrongful Dismissal Action – Krecisz v. Cascades Recovery Plus, 2021 ONSC 3225 (CanLII): Miguel was successful in resisting a motion to stay a lawsuit because the employee could have been subject to a collective agreement but was not paying union dues.

Successful Costs Award in Wrongful Dismissal Case – Walter v. Jobstart, 2019 ONSC 2722 (CanLII): Miguel represented his client in a wrongful dismissal action and then received 150% of the settlement amount to cover legal fees of the claim.

Employer Has To Pay For Cancelled Employment Contract –  Kim v. BT Express Freight Systems
Decision: Monkhouse Law was successful in obtaining damages for an employee whose offer of employment was rescinded. Read more about the case.

Wrongful Dismissal of Pregnant Employee – Nahum v. Honeycomb Hospitality Inc., 2021 ONSC 1455: Trial Decision: Monkhouse Law represented a client with 4.5 months of seniority at trial after she was terminated. The client was pregnant at the time of termination and Monkhouse Law was able to have the judge recognize this ground as elongating the notice period, getting 5 months of severance for the employee plus money for benefits lost. Monkhouse Law was later successful in having the judge award $22,000 to cover the client’s legal fees.

Unjust Dismissal Case Won For Bank Employee – Maticevic and Bank of Montreal Re: 2019 CarswellNat 4762 (Westlaw): Monkhouse Law was counsel in the case of a dismissed Bank employee. In the first hearing the adjudicator rejected the bank’s argument that it was a legitimate layoff and in the second decision (2020 CarswellNat 2661) the adjudicator awarded the 18 year employee 22 months notice plus legal fees. The employee was also reinstated into his position and went back to the bank. In a subsequent decision, the adjudicator awarded over $65,000 in order to cover the employee’s legal fees for the hearing.

Successful Unjust Dismissal and Reinstatement of Bank Employee – P.D. and Bank of Nova Scotia: 2019 CarswellNat 2340 (Westlaw): Monkhouse Law was counsel in the case of a bank employee accused of theft and dishonesty. The Adjudicator under the appointed to hear the case found that the allegations of theft were not proven by the Bank. The employee was reinstated to her position with full back pay, awarded $5,000 in moral damages and her legal costs. In a second decision (2020 CarswellNat 640) costs were awarded at over $90,000 to cover the employee’s legal fees.

Employment Lawyers at Monkhouse Law specialize in Employment Law, Human Rights Law, and Disability Insurance Law. We serve employees, independent contractors, and employers, and strive to get optimal results for every client through skilled advocacy and research on each matter. We have successfully represented clients before all levels of court in Ontario, including the Superior Court, the Divisional Appeals Court, and the Court of Appeal and have also appeared before the Supreme Court of Canada.

Please Note: Each case is individual and past success does not guarantee future success.