Monkhouse Law acted for a legal aid clinic as an intervenor at the Supreme Court of Canada in two important employment law cases. 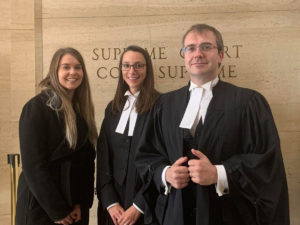 According to Uber’s services contract with its drivers, disputes between the parties must be resolved via arbitration in the Netherlands. The contract also provides that it is not an employment agreement.

A class action was started on behalf of Uber drivers in Ontario claiming damages of $400 million. It is alleged that the workers were misclassified as independent contractors rather than employees and denied minimum employment entitlements. In 2018, Uber brought a preliminary motion to stay the proposed class action  in favour of arbitration in the Netherlands. The first level court ruled for Uber and granted the stay. The following year, in 2019, the Court of Appeal for Ontario overturned that ruling. The Court found that the arbitration agreement was an illegal opting out of the Ontario employment standards legislation. Additionally, the appellate jurisdiction decided that the arbitration clause invalid because it was unconscionable. The Court decided that imposing arbitration was unfair and that the Uber chose the arbitration clause to favour itself.

On June 26 2020, the Supreme Court decided that the arbitration clause in the Uber agreement was unconscionable and refused to stay the class action in favour of arbitration in the Netherlands. Read our summary of the decision in our article Uber v Heller- Green Light for Gig Economy Workers.

Uber v. Heller | Substantive Rights and Access to Justice in the Gig Economy
Alexandra Monkhouse participated in the panel discussion concerning the Supreme Court hearing in a matter concerning arbitration clauses and employment class actions. Monkhouse Law acted as counsel for the intervenor Don Valley Community Legal Services, a legal aid clinic. Here is a brief summary of the arguments before the Courts and the lower Courts’ decisions. Watch video >>

Podcast: Lawyered. The Podcast.
Alexandra Monkhouse chats with Hussein Panju on Lawyered about Covid Benefits, Uber and the Gig economy. Listen to podcast >>

Link to our factum:
https://www.scc-csc.ca/WebDocuments-DocumentsWeb/38534/FM030_Intervener_Don-Valley-Community-Legal-Services.pdf

Mr. Matthews worked for Ocean Nutrition (the “Company”) for 14 years as a senior chemist. In 2007,  the Company hired a new Chief Operating Officer (“COO”). Under the new COO Matthews’ job duties were progressively reduced over that time, and he was gradually sidelined from significant involvement in projects that were relevant to his job descriptions and expertise.

At the same time, in 2007, the Company put in place a Long Term Incentive Program (“LTIP”) for the senior management team, Matthews included, that would grant the recipients a specified share of the proceeds if the company were to be sold during their tenure with the Company. In June 2011, Matthews left the Company and filed suit alleging wrongful dismissal. In July 2012, Ocean Nutrition was sold to a competitor which would have triggered a $1,086,893.36 payout to Matthews under the terms of the LTIP were he to be deemed an employee at the time.

At trial, Mr. Matthews was found to have been constructively dismissed and entitled to 15 months’ pay in lieu of notice. He was awarded more than one million dollars, most of which was related to the incentive plan. According to the judge, if the Company had acted in good faith, and, had Mr. Matthews remained employed throughout the notice period as a result, his right to that share of the company would have materialized. The Company appealed. The majority of the Nova Scotia Court of Appeal found that the wording of the plan prevented Mr. Matthews from recovering any money, because he needed to be “actively employed” at the time of the sale. One judge of the Court of Appeal disagreed. In his view, there ought to be consequences for an employer which acts dishonestly performing the contract.

Breaches of the duty of good faith are separate wrongs that may give rise to damages, separate from reasonable notice awards.

Podcast: The General Appeal Podcast, Fair Notice – You’re Fired
In this podcast, Monkhouse Law explains the definition of the notice period, executive incentive agreement or employee benefit plan and what an exclusion clause means. The lawyers discuss the Matthews case where the Supreme Court of Canada will weigh in on the consequences of constructive dismissal of a senior employee entitled to a generous incentive plan. Listen to the podcast >>

Link to our factum:
https://www.scc-csc.ca/WebDocuments-DocumentsWeb/38252/FM040_Intervener_Don-Valley-Community-Legal-Services.pdf

The key issue the Court will have to grapple with in this case will affect unionized employees’ access to human rights adjudication outside of the grievance process. The complainant in Horrocks brought a complaint to the Manitoba Human Rights Commission alleging that she was discriminated against on the basis of disability after being disciplined and discharged by her employer. Her employer, however, objected to the complaint being heard by the Commission as they argued the proper forum was before a labour arbitrator due to the collective agreement.

Link to our factum: