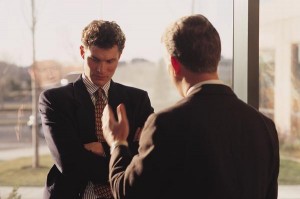 A reprisal, in the employment law context, is when an employer has taken action against an employee who has exercised their rights.

Typically, the employer will implement measures to affect the employee’s income negatively, or, more commonly, threaten to terminate the employee under false allegations of cause. The employer may also suspend, penalize or even intimidate and coerce the employee as retaliation for asserting their rights.

It is important to note that acts of reprisal can also occur in a very subtle and discrete manner such as: a negative performance review, or a hostile attitude or work environment.

Under the Employment Standards Act, 2000, reprisals are an offence. Section 74 reads as follows:

74. (1) No employer or person acting on behalf of an employer shall intimidate, dismiss or otherwise penalize an employee or threaten to do so,

The courts have found that significant damages are warranted wherein an act of reprisal has occurred. The onus is on the employer to prove that a violation of s.74 has not occurred, a principle recognized in the case of Mucollari v. Il Gabbiano Ristorante [2013] O.H.R.T.D. No. 393.

In the case of Chan v. Tai Pan Vacations Inc [2009] H.R.T.O No. 273, an employee had been discriminated against on the basis of sex by her employer, launched a human rights complaint, and was then ill-treated by her employer. The employee launched her original complaint for the way she was treated while pregnant and the lack of accommodation given to her. Once the employer found out about the complaint they proceeded to withhold financial bonuses, failed to provide multiple salary increases, and did not allow the employee to attend multiple special events that were relevant to her job. The employee was later terminated without cause.

These cases represent a spectrum from which damages for reprisal can be approximated. Damages in reprisal situations are typically accompanied by general damages for the corresponding violation(s) of the Ontario Human Rights Code, R.S.O. 1990, c.19.

The principle, however, is clear: employers are not entitled to retaliate against employees on the basis that they asserted their right(s). Employment Standards exist for a reason and, should an employer not abide by these standards, employees should be able to voice their concerns and, where applicable, go to the appropriate authority, without fear of losing their job or being punished by their employer.

How does Reprisal differ from Wrongful Dismissal?

In both situations, there is no sufficient cause for termination based on these basic facts, as the employee is simply exercising a statutory right. Furthermore, an employer who terminates an employee without cause in these situations can be vulnerable to a claim against them for reprisal and a potential award of damages to the former employee. Essentially, reprisal can be a factor in a wrongful dismissal but does not represent a dismissal in and of itself.

Given the costs and damages to your reputation which accompany a reprisal claim, it is best to evaluate termination decisions, particularly where a complaint has previously been made by the employee.

If you are unsure as to whether termination is the appropriate response to such a situation or any situation within your workplace, it is best to consult with an Employment Lawyer to minimize risk and to proceed in the best manner possible.

If you were terminated and/or ill-treated by your employer shortly after exercising a statutory right or bringing discrimination or other claims to their attention, you may have a claim for reprisal. Pursuant to the case of Noble v. York University 2010 HRTO 878, the following factors are required to establish a complaint of reprisal:

a. An action taken against, or threat made to, the complainant;
b. The alleged action or threat is related to the complainant having claimed, or attempted to enforce a right under the Code; and
c. An intention on the part of the respondent to retaliate for the claim or attempt to enforce the right.

An employment lawyer can review the factors surrounding your termination and the applicable law and determine whether a legal remedy may be available to you. Learn more about our team or contact us for a free 30 minute phone consultation.