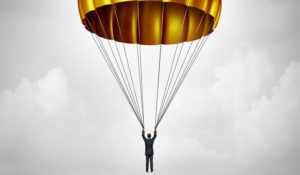 A golden parachute is a term coined for clauses in employment contracts that provide for enhanced severance packages. Typically, these are given to executive level employees. In Ontario, there are certain termination packages that employees are legally entitled to receive upon termination unless terminated appropriately for cause. For instance, the minimum severance entitlements upon termination prescribed by the Employment Standards Act can amount to, at maximum, 8 weeks of notice including salary and benefit continuation and severance pay if applicable. Golden parachutes, however, operate to provide much more than the statutory minimum, and in some cases, can amount to months or even years’ worth of total compensation, including bonuses, stock grants/options, extended health care benefits, full pensions etc. As the name indicates, golden parachutes provide execute level employees a soft landing if they are ever terminated.

From a business perspective, golden parachutes are offered to executives in part to recruit and retain them. These clauses also protect executives in the uncertainty of a corporate takeover and ensure that shareholders are not denied beneficial M&A deals. Golden parachutes are triggered when the executive’s employment is terminated, there is a change in control of the business, or, in some cases, when the employee resigns for ‘good reason’.

Golden parachutes are not without their criticisms, however. Given, the disproportionality between severance packages of regular employees, and executives that receive golden parachutes, the company’s employees, shareholders, and the general public may have some negative sentiments towards this favourable treatment.

Further, if an executive ends up being a poor performer, they may be entitled to a large payout notwithstanding their work. In these cases, the company may be viewed as rewarding poor performance and favoritism towards high earners.

In the most egregious of causes, golden parachutes have been provided to executives in the wake of sexual harassment scandals in the workplace upon their resignation or termination causing major backlash for certain companies. As readers of this blog will know, #MeToo has greatly impacted workplaces and employment law with the increase in workplace investigations and review of internal policies, cause allegations involving sexual harassment and the unenforceability of signed full and final releases. In a recent example, Google’s parent company is being sued by its shareholders for allegedly failing in its duty to protect the company and its shareholders with the payout of dozens of packages to employees including senior managers facing serious misconduct allegations. Google joins a list of many companies that have come under fire for providing such packages amid sexual harassment allegations including Fox News and Hewitt Packard while other companies such as CBS and NBC claim to be withholding such payments.