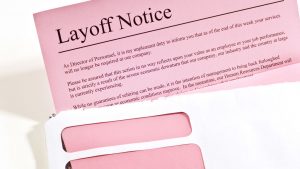 No Inherent Right to Temporary Layoffs

A layoff, even if intended to be temporary, generally results in a constructive dismissal if it is not allowed by the employment contract.

However, Section 8 of the ESA specifically says that no civil remedies of employees against employers are affected, meaning that the ESA gives employers no rights at all.

While the right to temporary layoff employees may exist in certain industries such as construction, it is NOT an automatic or implied right, unless: 1) it is explicitly set out in the employment agreement; or 2) there is strong evidence to suggest that the employee is aware of the risk of being laid off.

In those cases, the Plaintiffs were both temporary laid off by CIMA in January of 2013.  Neither of the Plaintiffs objected to the layoff at the time it was imposed. The Plaintiffs were recalled to work five months later, but both declined the recall invitation as they had already obtained alternative employment. Instead, the Plaintiffs launched legal claims for constructive dismissal. At the summary judgment motions, the plaintiffs argued that it was neither an express or implied term of their contracts that the Defendant could invoke the layoff provisions of the ESA. No mention of temporary layoffs was made in their employment contracts, and the possibility of layoffs had never been discussed with them prior to the layoffs.

The Court held the right to impose a layoff as an implied term must be notorious, even obvious, from the facts of the particular situation. This high standard was not met in this case. The Judge found that the Plaintiffs could not reasonably be expected to have anticipated the layoffs, as there had been no layoffs in the company before October 2012, just months before the Plaintiffs were laid off. Furthermore, just because a co-worker had been laid off does not create any legal basis to impose this layoff on the Plaintiff. As a result, both Plaintiffs were entitled to damages for the termination of their employment.

With respect to the Defendant’s argument that the employees failed to object to the layoff, the Court in the CIMA cases held that an employee may in fact accept the layoff without being bound to it.  This means that simply acquiescing to a layoff is not enough to disprove a constructive dismissal claim if, in the first place, there is no explicit or implicit contractual ability to layoff the employee.

Such was the finding in the recent Divisional Court of Appeal decision of Kurt v. Idera Inc. o/a Uptime Software Inc. where Monkhouse Law represented the employee. In that case, the employee had been placed on a temporary layoff and was recalled to work six months later. He declined the recall position, as he had already obtained alternative employment. Instead, he retained counsel and launched a wrongful and constructive dismissal claim. At the summary judgment motion, the judge found that Mr. Kurt had acquiesced to his layoff, as he had waited six months before objecting to his layoff. The motions judge did not consider whether Mr. Kurt’s employment contract allowed the layoff in the first place. Instead, he dismissed the Plaintiff’s wrongful dismissal action on the basis that, by waiting six months before raising an objection, the Plaintiff had acquiesced to the layoff. The Plaintiff appealed.

On appeal, the Divisional Court held that the motions judge erred in law when he found that the appellant had acquiesced to his layoff. The Court held that in any constructive dismissal claim, the first step is always to consider the terms of the employment contract. This is per the Supreme Court of Canada’s direction in Potter v. New Brunswick Legal Aid Services Commission, 2015 SCC 10 (“Potter”). Potter explains that determining whether constructive dismissal has occurred is a two-step analysis. At the first step, the Court must determine whether there is an express or implied term in the employment contract which gives the employer the authority to place the employee on a layoff. If there is not, the change is unilateral and will constitute a breach of the employment contract and a wrongful termination.

However, although the lower court ruling was overturned by Monkhouse law the logic might still be used by a different judge to find that fast action is required. So if you are laid off you should hire a lawyer immediately.

These cases, collectively, stand for the proposition that an employer has no right to temporary layoffs where the employment contract does not provide for it, and where it is not implied and well known. In such cases, the employee has in fact been terminated and is entitled to damages arising from a wrongful dismissal, regardless of any failure to object to the layoff.

If you have questions about temporary layoffs and are concerned about your legal rights, please contact Monkhouse Law today for a free telephone consultation.