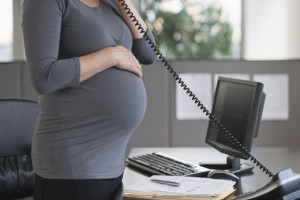 In the third installment of our four-part series on human rights issues related to pregnancy and maternity leave, we turn to the decision of Harris v. Yorkville Sound Ltd., 2005 CanLII 46394 (ON SC).

In Harris, the Plaintiff, who had worked for eight years in multiple departments of the Defendant’s operation, was terminated with cause while she was three months pregnant.

While she was pregnant with her third child, complaints began to surface regarding the Plaintiff. Namely, she was accused of being “too vocal”, “disruptive” and incapable of getting along with her co-workers. The Defendant asserted that these issues arose three years into her employment, that there was some improvement after a written warning, and that no additional warnings were provided for the remainder of her employment.

Following her termination, the Plaintiff was given a cheque for $8,055- the equivalent of 15 weeks’ pay. Her employer asserted that there was significant cause to terminate her, on the basis of the complaints discussed above.

Findings of the Court

The court found that there was insufficient cause to terminate the Plaintiff. While it did not find that she was discriminated against on the basis of sex (pregnancy), it awarded her 14 months’ notice, an increase of 4 months from the reasonable notice period, given her status of pregnancy. In relying on its methodology to extend the notice period, the court noted the decision in Tremblette v. Aardvark Pest Control Limited, [1987] O.J. No. 2380, wherein Justice Hoilett made the following commonsensical observation: “The plaintiff was pregnant at the time of her dismissal, a fact which fairly or not, did not enhance her immediate employability.”

This was demonstrated by the fact that the Plaintiff only found work as a part-time school bus driver, which can hardly be said to have been comparable re-employment, almost two (2) years following her termination.

The termination was also hard on the Plaintiff with respect to her financial situation. Aside from her relatively lengthy period of unemployment, she also had to pay for an expensive prosthesis for her newborn child, who was born with a rare eye tumour. As the Plaintiff no longer had benefits, it was an out of pocket expense.

Principles of the Decision

Advice for Employees
If you have been terminated for being pregnant, you may have a legal remedy available to you. As the decision in Harris v. Yorkville Sound illustrates, you could be entitled to an elongated notice period, in addition to damages under the Ontario Human Rights Code, R.S.O. 1990, c.19 if it is found that you were discriminated against. If you have any questions, contact Monkhouse Law today for a free consultation.