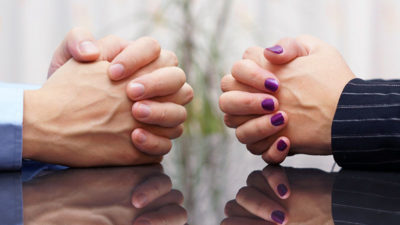 To bring a wrongful dismissal matter before the courts, the employee can do one of two things: start an Action or bring an Application. An Action is a stereotypical lawsuit, in which a party typically seeks money damages and has an in-person hearing with witnesses, oral testimony etc. An Application is usually commenced to obtain some sort of remedy such as a declaration that rights or obligations were violated, which may lead to the determination of money damages being paid by or to the parties. Applications are heard on affidavit (a declaration of facts) evidence with out of Court cross-examinations and then the lawyers argue in Court.

Both Actions and Applications result in the matter being adjudicated and a decision made on the matter. However, there are some key distinctions between the two: notably, an Application skips almost all other mandatory court processes that are required in a typical Action, such as mediation and the process of discovery. Although an Application may be strictly faster in terms of receiving a judgment, losing out of the crucial steps in an Action may prove disadvantageous to employees in all but the simplest of cases.

Now, the strange part is that the vast majority of employment law matters are able to be resolved by way of Summary Judgment. A summary judgment motion looks very much like an Application. The parties both submit affidavits, cross-examine on those affidavits, and then have submissions from lawyers before a judge.

So, it is tempting to consider moving ahead with an Application instead of an Action, since it will end up in a similar method eventually. However, similar does not mean the same, and there are major disadvantages of Applications over Summary Judgment such as judicial fact-finding and the lack of mediation.

Comparison between Applications and Summary Judgment

Summary Judgment is a process within an Action that is meant to substantially shorten the lawsuit. It is governed by Rule 20 of the Rules of Civil Procedure (“Rules”) in Ontario.

(a) the court is satisfied that there is no genuine issue requiring a trial with respect to a claim or defence; or

And Rule 20 sub 2.1 says that the Court has expanded fact-finding powers, weighing the evidence, evaluating credibility, and drawing reasonable inferences from the evidence.

In Hryniak v. Mauldin, [2014] 1 SCR 87, 2014 SCC 7 (CanLII) the Supreme Court of Canada found that there should be a presumption towards Summary Judgment for the sake of access to justice and efficiency of the Court system.

Applications, dealt with under Rule 14 and 37 of the Rules, on the other hand, do not explicitly allow judges to make the above evidentiary findings, or have the case-law support from the Supreme Court.

Judges have two options when dealing with an application under Rule 38, they can rule on the case or they can order a full trial if the information is not sufficient. Given the lack of fact-finding powers by statute, this is a real concern in a wrongful dismissal case.

The realistic outcome of this is that while Defendants have the same chances of winning as they would in any event, those bringing the applications have a decreased chance to win outright given that some issues such as mitigation are likely to require judicial fact finding only available at a trial or summary judgment.

The issue with Mitigation

In almost all employment cases there is a duty to mitigate (apply for jobs) on the part of an employee. It is often a live issue as to whether the employee has applied for enough jobs. This often requires examination of the employee and a determination of facts, credibility, etc. Which is an uphill battle in an Application, but is very often determined by Summary Judgment.

The following case demonstrates how bringing an Action may have been a better option than an Application.

The employee brought an Application to the court for wrongful dismissal. In his Application, the employee argued that the most recent contract was not enforceable as he did not receive any benefit from signing the agreement, as required by law, and that even if the contract was enforceable, the termination provision was ambiguous. Furthermore, the ‘double termination’ added further complexities to the matter. The employee argued that he was entitled to reasonable notice for the termination of his employment, much more notice than the absolute minimum required by law.

Ultimately, the Application judge decided against the employee. The judge found that the contract was enforceable and limits the employee to the statutory minimums.

Furthermore, if you go by application you lose out on the preliminary steps of a lawsuit before Summary Judgment, namely Mediation and Discovery

Matters brought as an Action have several mandatory steps which allow for parties to settle the dispute outside of the court. In several areas in Ontario, namely Toronto Ottawa and Windsor, the parties must go through a mediation process to try to settle the matter. In most cases where both sides may have a lot to lose, settlement is often the desired choice. Sometimes, it is better to get a bird in hand rather than two in the bush, and with many extremely experienced and qualified mediators in Ontario (especially Toronto), losing the mediation process is often a recipe for much higher legal costs, and much higher risks for both sides.

Even in cases where matters do not reach settlement, an Action for wrongful dismissal can be resolved relatively quickly due to the availability to bring a motion for summary judgment. Many matters can be adjudicated within a year, a short time relative to other areas of law.

Faster, but more risky for an employee

Going through an application might make things faster, but it also means that the employer can get an upper hand. Effectively, due to the mitigation issue, it is much easier for employers to win on Applications, because their arguments often do not rely on factual determinations (in the case of employment clauses, etc.), as in the Farah case where the clause was found enforceable. However, if the clause was found unenforceable then the Judge would have had to have determined if mitigation was a live issue. There was no guarantee that would have happened. So, it can be harder for the employee to fully win, having to get past mitigation issues.

On top of that, the employee loses the benefits of potential mediation where they can resolve the case faster, at lower cost, and walk away with something other than having to pay the employer’s costs. If you are going to lose the case, then a mediated settlement is always superior in retrospect.

If you have issues deciding between how to move your matter forward, make sure to contact us for a free 30 minute phone consultation.