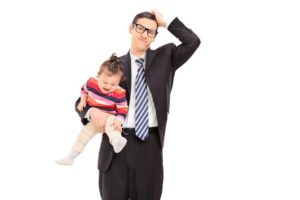 Parents who have childcare needs are entitled to certain protections in workplaces under the law. On November 22, 2017, the Ontario government passed Bill 148, Fair Workplaces, Better Jobs Act 2017 into law. As a result, both parents are now entitled to a Parental Leave of up to 63 weeks. If you are a new father and are contemplating taking a paternity leave, it is important to be aware of your rights in an Ontario-regulated workplace.

Many employees are unpaid during paternity leave. Thus, new or expectant fathers may qualify for employment insurance (EI) for up to 55% of their regular earnings. Some employers are willing to compensate for the lost earnings by adding to the EI income; this compensation is also called a “salary top up”.  While employers are not obligated to pay wages to an employee who is on paternity leave, they must continue their benefits and recognize the duration of the leave when calculating the employee’s length of service and seniority.

Despite legal protections like the above, some employees still experience mistreatment in the workplace for taking time off as a new parent. In the case of Demers v. MatchTransact Inc. o/a WOW! Mobile, Wow! Mobile pressured its employee, Mr. Demers, to not take his paternity leave by claiming that the leave would hurt his career. It then proceeded to pass Mr. Demers over for promotions because he took the leave.

Seven months later, Mr. Demers took an emergency leave for half a year to care for his ill daughter. His manager then told the remaining staff that Mr. Demers resigned and threatened to call security when Mr. Demers stopped by the workplace. As a result of this treatment, Mr. Demers filed a human rights complaint against Wow! Mobile. After filing the complaint and returning to work, the company moved him to a less convenient location. It also encouraged the staff to closely watch for any misbehaviour of Mr. Demers so that his employment would be at risk. Shortly after returning to work, Wow! Mobile terminated his employment based on unsubstantiated allegations of sexual harassment.

The Human Rights Tribunal of Ontario (HRTO) found Wow! Mobile’s conduct to be discriminatory based on Mr. Demers’ family status as defined in s. 10(1) of the Ontario Human Rights Code. According to the HRTO, Mr. Demers endured a period of an objectively hostile and prolonged work environment due to his family status. Furthermore, Wow! Mobile retaliated against him when he exercised his rights as a parent by terminating him for sexual harassment claims without sufficient proof. As a result, the HRTO awarded him $62,000.00 in damages and lost wages.

Many of the rights discussed above apply to both parents. It is important for new or expectant parents to recognize when their employers are violating their rights and what they can do about it. Employees like Mr. Demers who have been terminated due to a discriminatory reason may pursue a claim in the HRTO or file for wrongful dismissal in the civil court. The advantage of proceeding in civil court is that, in addition to potentially giving more termination pay, the Court can also award human rights damages. At Monkhouse Law, we often help people who have been fired because of discrimination. If you believe you are experiencing similar issues, call us today for a free consultation.