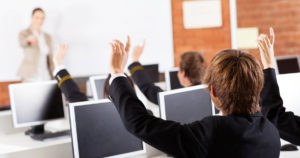 The difficulty of landing full time teaching jobs at the big school boards has created a large pool of underemployed qualified teachers and a ready supply of staff to take on short-term teaching gigs on a contractual basis. In many fields, more university graduates are produced than the economy needs. In recent years, over 40 percent of teachers in Ontario have been on short-term contracts rather than on secure long-term employment, and unemployment rates for teachers have been high according to the Government of Canada.

Walmsley v. 2016169 Ontario Inc is a good example of a growing trend in which employees are using class actions to complain about misclassification and the denial of statutory employee benefits. Traditional jobs and forms of business are being disrupted by new technology and new business models.  In many cases, the loss of traditional employment relationships erodes employee rights.

In Walmsley, the Defendants were a series of numbered corporations operating as Blyth Academy.  Blyth Academy is an alternative, private Ontario high school offering students credits in a non-traditional manner, including through on-line learning. Blyth Academy hired some teachers as independent contractors.

No Contracting Out of the Ontario Standards Act

Ontario’s Employment Standards Act, 2000 (“ESA”) is remedial legislation that recognizes the weak bargaining position of individual employees relative to their employers.  One of its most significant features is that it does not permit “contracting out.” Therefore, the employer cannot argue that the workers “agreed” to give up their entitlements to things such as the minimum hourly wage, vacation pay, holiday pay or overtime granted by the ESA.

Employee Misclassification is Common in the Gig Economy

Employers in the gig economy often deliberately misclassify their workforce, making it seem as though their workers are self-employed.  However, if a worker is misclassified as an independent contractor rather than an employee, they are entitled to minimum employment standards under Ontario legislation. Courts will ignore agreements that specify that the workers are not employees when the facts of the relationship reveal that the parties are in a master-servant relationship.

The Walmsley action was brought on behalf of between 1,000 and 2,000 individuals providing teaching services to Blyth Academy, either currently or in past years.   Some of them were classified as independent contractors and some of them were classified as regular employees. However, many of the latter alleged that Blyth did not correctly track the number of hours they worked and failed to pay them correctly for overtime hours.

Negotiation before a Certification Decision

Before a class action can get underway, the Representative Plaintiff, who is an example of the legal issues intended to represent the entire class, must meet certain criteria in order for the claim to be certified. Certification is often a hard-fought battle, and occasionally a class action can be defeated at this stage based on legal technicalities.

In the present case, a certification hearing was held in February of 2019 before Justice Glustein.  However, the parties asked the judge to hold off on issuing his decision, as they hoped to work out a settlement.   They entered into two rounds of mediation and came to the settlement that was approved by the judge. The agreement was both a consent to certification of the class as well as a settlement of the action.

The Settlement – $2.5 million for the Class Action

The settlements in employment class actions tend to be modest relative to those in large tort and security claims. This is both due to the small number of members of the class and the type of damages complained of tending to be relatively modest. Although the amounts of money on a per-employee basis may seem small, it is can still make a large difference to an employee in precarious employment and is important to protect employee rights at large.

In the present case, the settlement approved was for $2.5 million. The full-time employee category was allowed up to $5,300 for each employment agreement. Those who were hired as independent contractors will be eligible for up to $2,100 per semester.

In approving the settlement, Justice Glustein considered not just the monetary amounts, but the strengths of the case from each side, and the risks that they would face if they went to trial instead of agreeing to a settlement.  He concluded that the agreement was within the “zone of reasonableness,” as it was reached “after extensive mediation before two senior and respected members of the bench and bar, through good faith and arms-length bargaining.”

Justice Glustein further noted that, if the matter had gone to trial, there was a risk “both that extensive time would be required and that a common issues judge might find that a common issues trial was not appropriate.”  Class actions can, in fact, drag on for many years. A settlement of this type is a compromise that achieves some justice for the claimants reasonably quickly.

In addition to providing some financial benefit for the class members, in this particular case, Blyth Academy changed its workplace practices. Employment standards class actions have a broader impact because they change employers’ behaviour.   Other employers, reading about the outcome, will be aware that they face a risk of being sued if they shortchange their employees.

Employment lawyers at Monkhouse Law have started a number of employment class actions. Notably, we have successfully certified two misclassification class actions, one for document reviewers and another for solar energy sales representatives. If you are an employee or contractor who believes they are being short-changed, contact Monkhouse Law today for a free consultation.