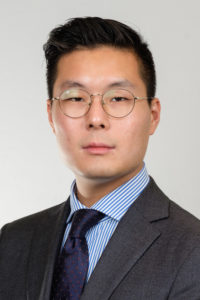 Languages: Walter is fluent in Korean

Walter is barrister and solicitor, licensed by the Law Society of Ontario, practicing employment law.

During law school, Walter volunteered as a litigator and caseworker at community legal aid and participated in several moot and alternative dispute resolution competitions. During his third year of law school, Walter studied human rights at the University of Essex in England.

Prior to joining Monkhouse Law as an associate, Walter worked at prominent personal injury law firms where he was exposed to each step of handling a case. He completed his articles at a downtown litigation firm where he participated in trials and appeals in complex medical malpractice and personal injury matters.

When not working Walter enjoys watching the Raptors and exploring the great outdoors on foot or bicycle.

Andrew Monkhouse and Walter Yoo: Thanks for your tenacity and skills in winning this case. From the moment I walked in – bruised and hesitant – through your doors in December, till today when we have finally concluded this chapter. A big thank you from my family too for pursuing justice for me. My daughter who is finishing University this year was closely watching and one day I hope she will live in a fairer world. I specially thank you for your support in responding to all my anxieties about the process and outcomes over these month. Thanks for your patience with me. You are the best decision we made. – AM from Toronto
I highly recommend working with Walter Yoo. Walter showed steadfast commitment to my case, despite its limits and challenges. He was knowledgeable in the issues at hand and conferred with colleagues at key moments to determine the best path forward. His communication was clear and effective, and he clarified details whenever necessary. I was fully satisfied with his work and very appreciative of his efforts on my behalf. – SK from Toronto

Korean Employment Lawyer in Toronto:
On top of assisting many clients in English before the Superior Court of Ontario Walter also speaks Korean.

See video below of Walter introducing himself in Korean:

Walter speaks about the duty to accommodate: